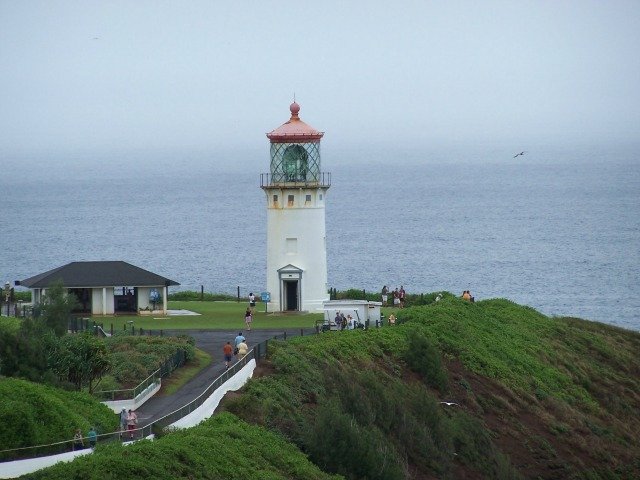 A must-see for anyone visiting Kauai, especially if you are a bird or whale lover, is the Kilauea Lighthouse. It is a photographer’s dream location. Sweeping, panoramic, whitewater views, with sea birds circling above and burrowing on land, one can not help but get an impressive shot of the beauty that makes Kauai so special. Even more exciting are the humpback whales that cruise by in their pods during whale season (November to April).  It is not uncommon to witness humpback whales breaching or pounding their fins on the surface of the ocean at this north shore whale sanctuary.

If you are staying at Honu Point, the Kilauea Lighthouse can be seen from the house. It sits 180 feet above sea level on the most northern piece of property on Kauai. The original lighthouse (circa 1913) is no longer in use but it is an historical landmark. Today a modern light shines out to sea. Here is an early morning winter view from Honu Point. 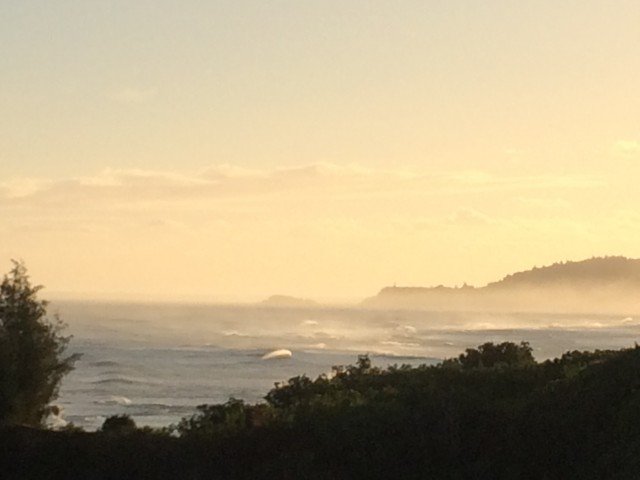 The Kilauea Lighthouse sits on Kilauea Point which is a National Wildlife Refuge. The National Wildlife Refuge System is the system of public lands and waters set aside to conserve America’s fish, wildlife and plants. This video will give you a feeling for what you will see when visiting the Kilauea Lighthouse. Volunteers roam the area to answer questions visitors may have.

There are four major reasons to visit the Kilauea Lighthouse: the lighthouse itself, the seabirds, the marine animals and the opportunity for incredible photographic shots.

Built in the historic era of lighthouses in the U.S., this 52 foot structure was commissioned as the Kīlauea Point Light Station on May 1, 1913.  One hundred years later on May 1, 2013 it was dedicated to U.S. Senator Inouye who was instrumental in raising the private and public funds necessary for the restoration of the lighthouse.

Today, the gleaming white tower has been restored to its original condition. The restoration, however, did not make the light operational. According to the Kilauea Point website, the 8,000 pound lens structure was originally designed to float on 260 pounds of mercury, allowing the lens to rotate with a simple weight-driven clock. Due to the now-known dangers of mercury, this mechanism could not be restored. The lamp itself is lit for ceremonial occasions, but the lens does not rotate.

The crowning jewel of the lighthouse is the Fresnel lens, a complex array of lens and prisms which focused the light into a powerful beam, reaching 22 miles at sea. Today, visitors can see this remarkable lens assembly on the tours conducted twice a week. The original light source was a kerosene lantern providing 250,000 candlepower, eventually replaced by a quartz iodine lamp putting out 2,500,000 candlepower.

No matter what time of year you visit, you will see thousands of sea birds surrounding the bluffs and point of the Kilauea Lighthouse.  Nests are burrowed into the side of the cliffs and if you listen carefully you will hear the sounds of the sea birds communicating to their young and the other birds around them. This poster greets you at the entrance to the Kilauea Lighthouse refuge. It introduces six of the many birds who call this point their home. 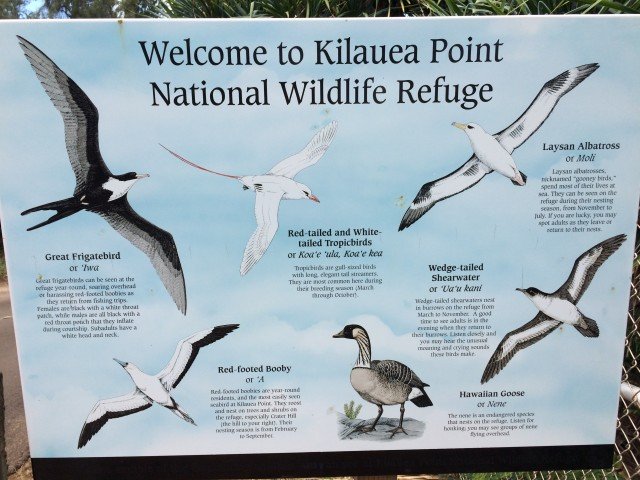 According to its website, because of its location at the northernmost tip of the island a couple hundred feet above sea level, Kīlauea Point provides a great vantage point for viewing marine life. At least eighteen species of toothed whales and dolphins, and five species of sea turtles are known to inhabit Hawaiian waters, but most will never be seen due to their lack of abundance, their behavioral patterns, and/or how far out to sea they live. Luckily though, there are three species of marine mammals and one marine reptile that can be observed by visitors at the Refuge. Here are brief descriptions from the website.

The Hawaiian monk seal is endemic to Hawaii and is a highly endangered species. Research and protection efforts are focused on conserving monk seals but the survival of this rare species still hangs in the balance. In recent years more of the seals have been moving down to the main inhabited islands from the remote northwestern Hawaiian Islands. Visitors and residents are learning how to appreciate this rare animal without interfering with it.

The humpback whale is also a federally endangered species. It migrates to Hawaii from Alaskan waters in November and December and remains here until April. During their overwintering time In Hawaii these baleen whales do not actively feed (krill is their food of choice and not found in Hawaii), but they do come here to give birth and to mate.

Spinner dolphins are most often seen from the refuge in the summertime when dolphin groups, called pods (sometimes consisting of more than fifty individuals!) tend to frequent the bay to the west of the lighthouse. Visitors are treated to the views of these dolphins as they repeatedly leap from the water in a spinning motion and splash down dramatically – thus the name “spinner” dolphin.  Their acrobatics are unmistakable and entertaining.

The panoramic views of the rocky coastline, and the surrounding green mountains, show the incredible beauty of Kauai. “Such a great vantage point for amazing photo shots. You feel like you are right on the edge of the world, as you are looking at the lighthouse, standing on the edge of the cliff. It can be a little crowded, and I’m not sure when would be a good time to go. This is definitely a must-see if you are visiting Kauai and trying to get really good photo shots.” Colton Puckett, August 2018.

The visitor center has several educational displays and videos to enhance your experience. At the well-stocked bookstore you will find a wide variety of quality educational products to help you understand the natural environment and natural history of the Kaua‘i National Wildlife Refuges, Kaua‘i and the Hawaiian Islands as a whole.

Location of the Kilauea Lighthouse:

Driving from Princeville, head south, toward Lihue, until you come to the Shell gas station. Turn left on Kolo Road, then left again on Kīlauea Road and drive 2 miles to the refuge entrance.  There you may stop and view the lighthouse from the entrance. All visitors entering the refuge are required to drive down into the designated parking area.  Parking is free.

An entry fee of $5 (cash only) is required for adults 16 and older. Children under 16 are free. All Federal Recreational Lands Passes are honored here. Passes are available for purchase at the refuge.

Tuesday through Saturday from 10am – 4pm.

For more of my blogs or to subscribe, go to the right-hand side of this page. Mahalo!