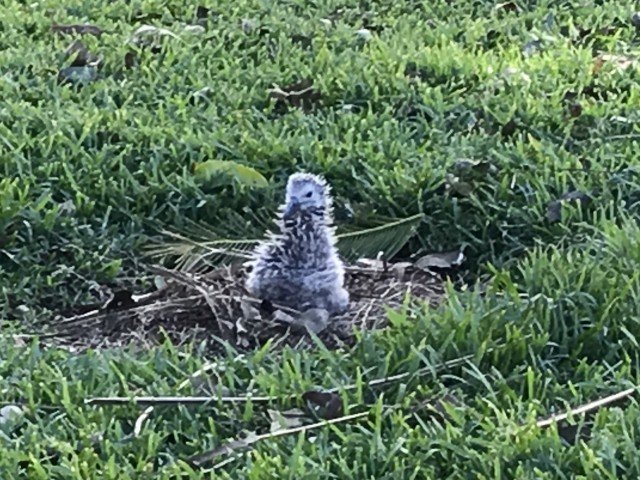 I’ve written thirteen blog posts about the Laysan Albatross at our Honu Point Vacation Rental on Kauai, but, by far, this is the one I am most excited about. I have always appreciated these graceful creatures but it was while building our vacation rental that I fell in love with them. Being on the property on a daily basis and watching them soar overhead was magical. Hearing and seeing the mating dances of young birds and eyeing nesting couples snuggling along Kaweonui Road made them even more endearing to me.

Each year I have been jealous when neighbors up and down the street are given the “right” to name a new chick because of it being born on their property. Our bluff property is not safe enough for nests and fledglings wait until they are six months old to waddle down our driveway ready for their first flight.

This year one pair, Larry and Dora, returned and scouted the area for the perfect spot to nest. They eventually decided on the interior of the cul-de-sac at the foot of our driveway. This was my chance! Because the property is not private I asked (okay, begged) our resident albatross historian, Cathy, if I might have the honor of naming this chick. She agreed!

Spending lots of time on Google translator and waiting not so patiently, I searched for the perfect name. An egg was laid and about a month later “my” precious chick started pipping its egg in order to meet his/her surrounding world. 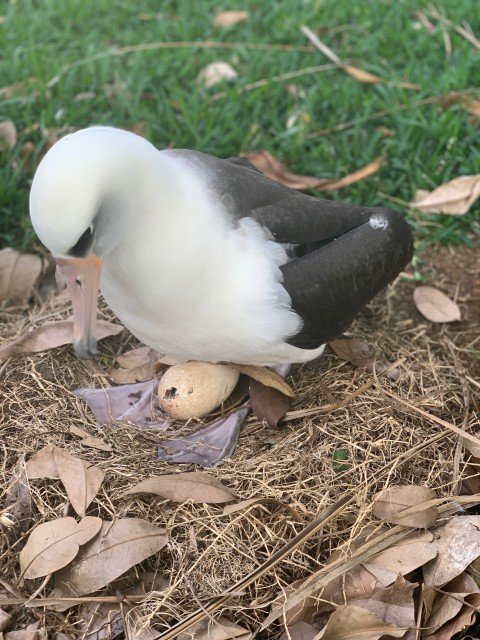 And finally, on January 30th, 2019 (my birthday!) this tiny fluff-ball emerged almost completely out of its shell. His/her name would be Pela which is Hawaiian for “soar.” 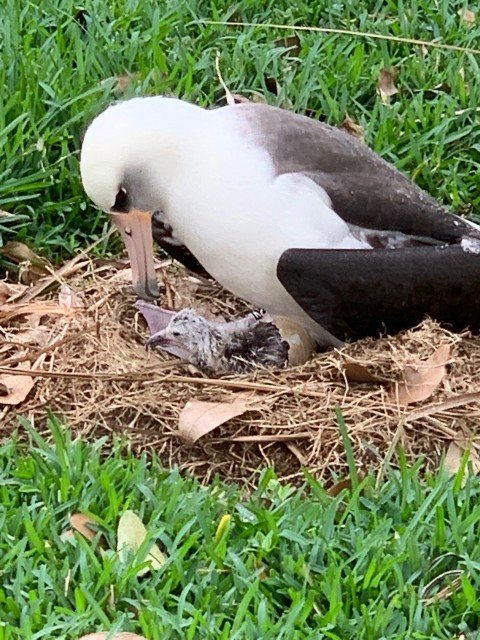 Quickly Larry, who was nesting at the time, showed his love by preening and cooing to his baby. Keeping Pela warm was his task for the first couple of weeks and figuring out how to sit on Pela without squishing him/her took some practice. 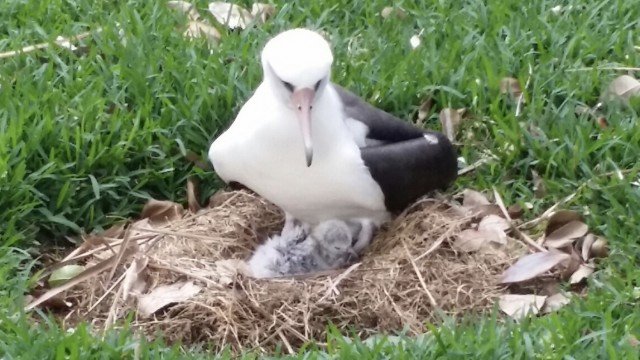 At this point I was off on vacation for 13 days. Friends sent me photos as they drove over to check on Pela. On my return I found that Larry was still on guard, and Pela, just 17 days old, is now being left by him/herself for short periods of time. Such a vulnerable period for the little one. Presumably Dora is on her way back from the north with a supply of food to regurgitate down the throat of her new baby. I imagine Pela will be more than ready for some sustenance.

In the meantime, Larry is doing his best at parenting. His food source is 1000 miles away so he must also be ready for the return of his mate. Be sure to turn up your volume as Larry communicates to the little one while he/she adds to his/her nest.

Pela will stay at the nest while Larry and Dora continue to take turns finding and bringing back food. There are eight other newborn chicks in the neighborhood that share the limelight with Pela but because he/she is in the center of the cul-de-sac I am betting he/she is the most photographed albatross chick in history. Little by little his/her fluff will turn into feathers so that by July, if all goes well, Pela and the others will take that giant leap (hopefully from our property) and fly off to find their own food. It will be three or four years before Pela returns to the neighborhood that first watched over him/her. I am already looking forward to that day. 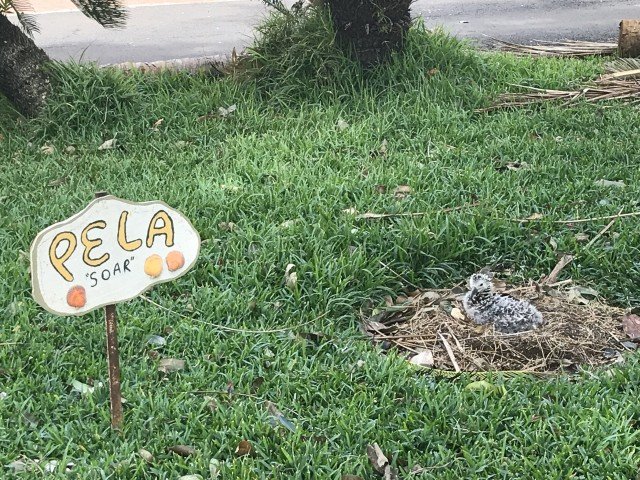 To see more photos of albatross or read my twelve other albatross blogs, go to

To hire a private bird-watching tour on Kauai, go to https://honupointvacationrental.com/kauai-hob-osterlund-bird-watching-guide/

For more of my Kauai blogs, or to subscribe, go to the right-hand side of this page (full screen computers). Mahalo!

To stay at Honu Point, check out the other pages on this website.